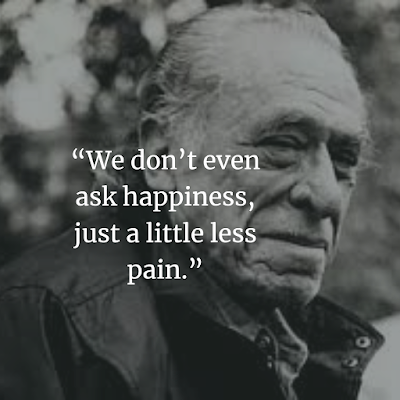 Charles Bukowski (1920-1994) is best known for poetry and fiction in which he caustically indicts bourgeois society while celebrating the desperate lives of alcoholics, prostitutes, decadent writers, and other disreputable characters in and around Los Angeles. 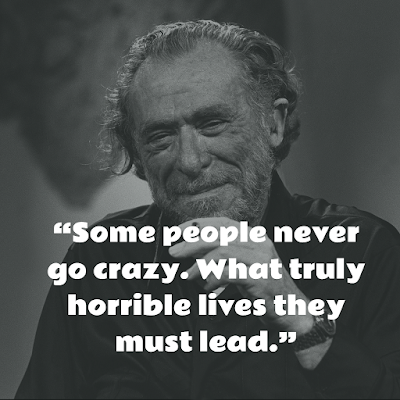 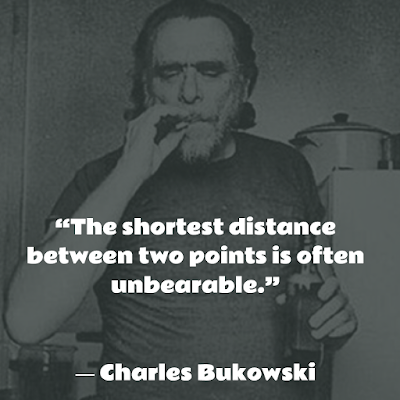 “The problem with the world is that the intelligent people are full of doubts, while the stupid ones are full of confidence.”
― Charles Bukowski

“I wanted the whole world or nothing.”
― Charles Bukowski, Post Office 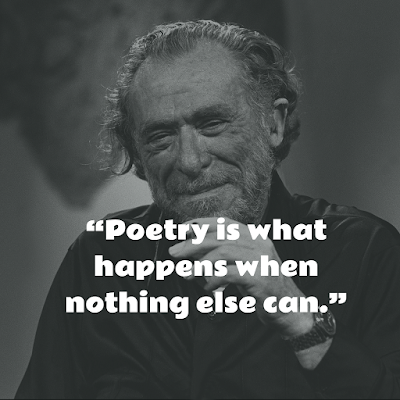 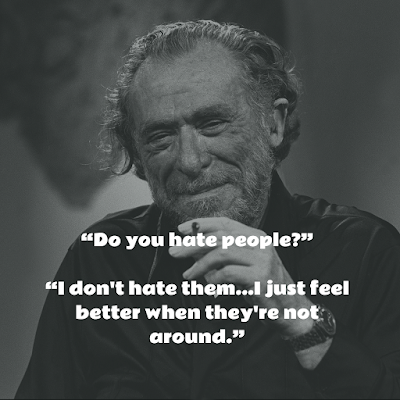 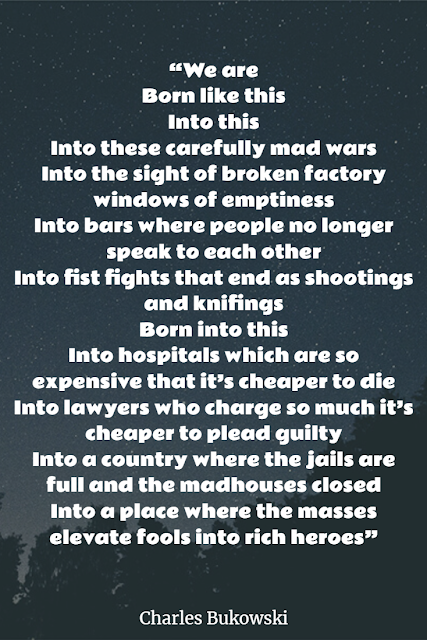 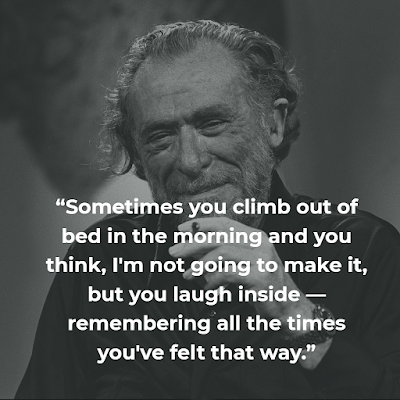 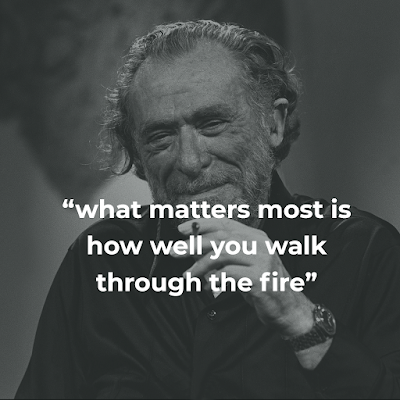 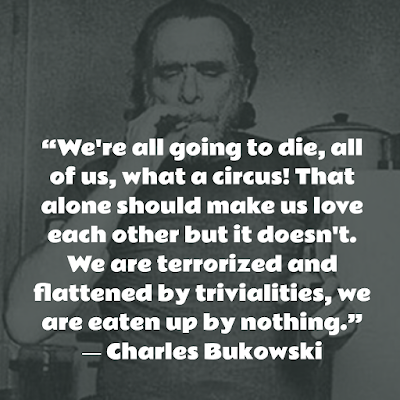 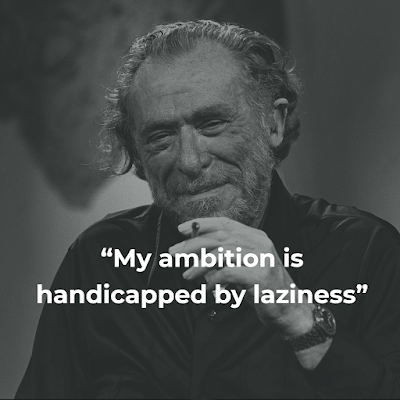 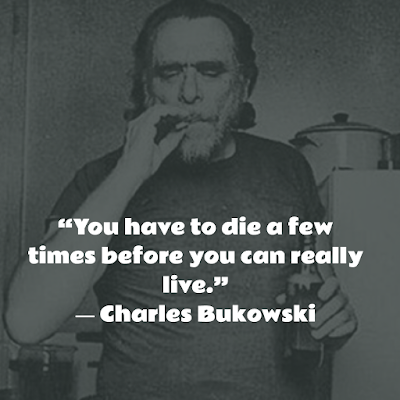 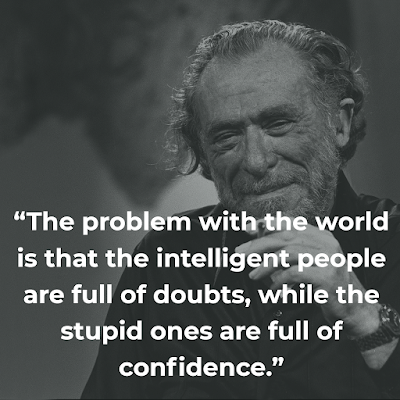 “I couldn't get myself to read the want ads. The thought of sitting in front of a man behind a desk and telling him that I wanted a job, that I was qualified for a job, was too much for me. Frankly, I was horrified by life, at what a man had to do simply in order to eat, sleep, and keep himself clothed. So I stayed in bed and drank. When you drank the world was still out there, but for the moment it didn't have you by the throat.”
― Charles Bukowski

“I had noticed that both in the very poor and very rich extremes of society the mad were often allowed to mingle freely.”
― Charles Bukowski, Ham on Rye

“If you have the ability to love, love yourself first.”
― Charles Bukowski 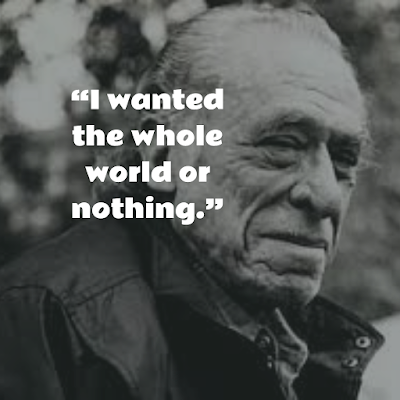 “Human relationships didn't work anyhow. Only the first two weeks had any zing, then the participants lost their interest. Masks dropped away and real people began to appear: cranks, imbeciles, the demented, the vengeful, sadists, killers. Modern society had created its own kind and they feasted on each other. It was a duel to the death--in a cesspool.”
― Charles Bukowski, Women

“my mother, poor fish,
wanting to be happy, beaten two or three times a
week, telling me to be happy: "Henry, smile!
why don't you ever smile?"

and then she would smile, to show me how, and it was the
saddest smile I ever saw”
― Charles Bukowski 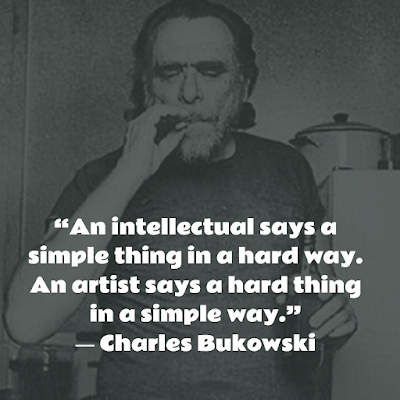 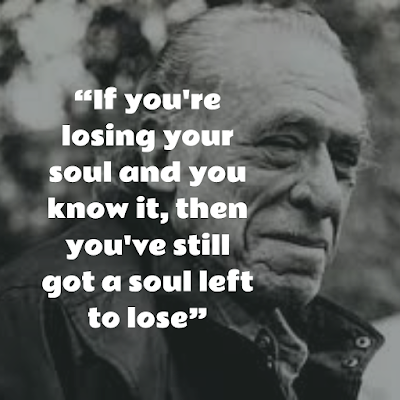 “I felt like crying but nothing came out. it was just a sort of sad sickness, sick sad, when you can't feel any worse. I think you know it. I think everybody knows it now and then. but I think I have known it pretty often, too often.”
― Charles Bukowski, Tales of Ordinary Madness

“the free soul is rare, but you know it when you see it - basically because you feel good, very good, when you are near or with them.”
― Charles Bukowski, Tales of Ordinary Madness

“those who escape hell
however
never talk about
it
and nothing much
bothers them
after
that.”
― Charles Bukowski

“A love like that was a serious illness, an illness from which you never entirely recover.”
― Charles Bukowski, The People Look Like Flowers at Last

“There's a bluebird in my heart that wants to get out
but I'm too tough for him,
I say, stay in there, I'm not going to let anybody see you.”
― Charles Bukowski 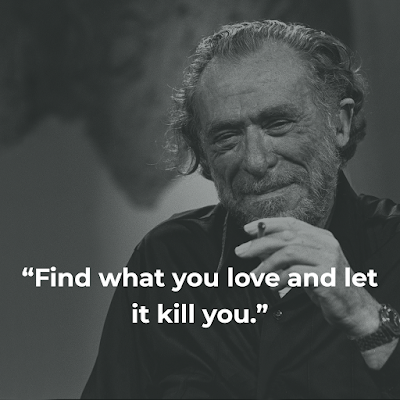 “My ambition is handicapped by laziness”
― Charles Bukowski, Factotum

“You have to die a few times before you can really
live.”
― Charles Bukowski, The People Look Like Flowers at Last 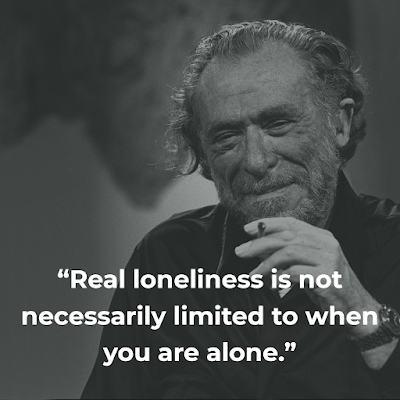 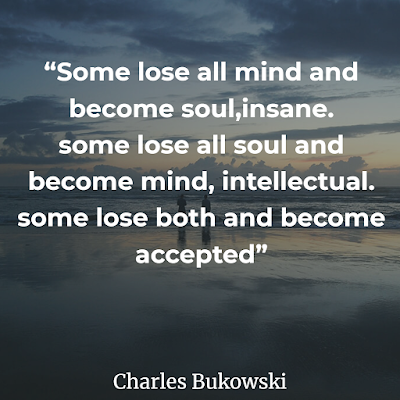 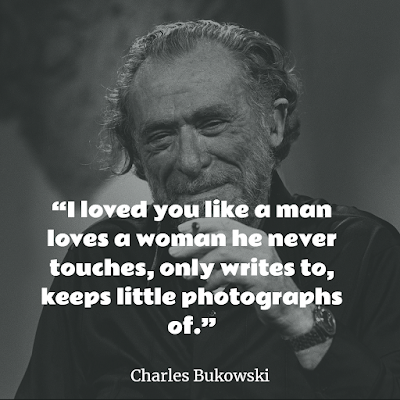 “I loved you like a man loves a woman he never touches, only writes to, keeps little photographs of.”
― Charles Bukowski, Love Is a Dog from Hell 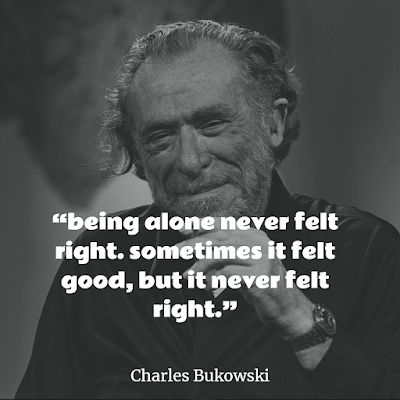 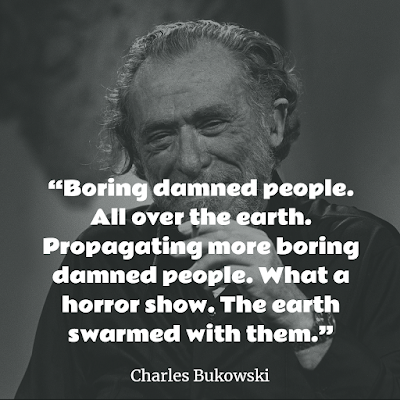 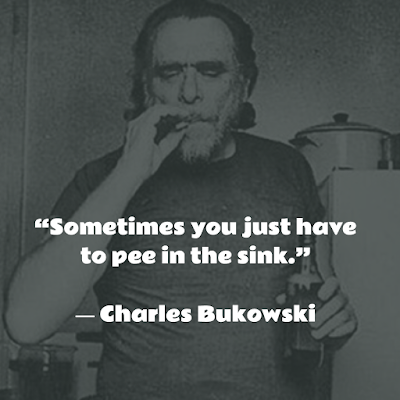 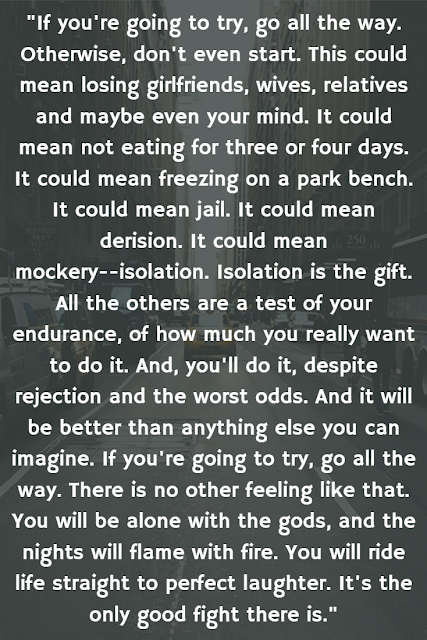 “Do you hate people?”

“I don't hate them...I just feel better when they're not around.”
― Charles Bukowski, Barfly

“For those who believe in God, most of the big questions are answered. But for those of us who can't readily accept the God formula, the big answers don't remain stone-written. We adjust to new conditions and discoveries. We are pliable. Love need not be a command nor faith a dictum. I am my own god. We are here to unlearn the teachings of the church, state, and our educational system. We are here to drink beer. We are here to kill war. We are here to laugh at the odds and live our lives so well that Death will tremble to take us.”
― Charles Bukowski

“Sometimes you climb out of bed in the morning and you think, I'm not going to make it, but you laugh inside — remembering all the times you've felt that way.”
― Charles Bukowski


“I guess the only time most people think about injustice is when it happens to them.”
― Charles Bukowski, Ham on Rye

“one can never be sure whether it's good poetry or bad acid”
― Charles Bukowski, Love Is a Dog from Hell

“I've never been lonely. I've been in a room -- I've felt suicidal. I've been depressed. I've felt awful -- awful beyond all -- but I never felt that one other person could enter that room and cure what was bothering me...or that any number of people could enter that room. In other words, loneliness is something I've never been bothered with because I've always had this terrible itch for solitude. It's being at a party, or at a stadium full of people cheering for something, that I might feel loneliness. I'll quote Ibsen, "The strongest men are the most alone." I've never thought, "Well, some beautiful blonde will come in here and give me a fuck-job, rub my balls, and I'll feel good." No, that won't help. You know the typical crowd, "Wow, it's Friday night, what are you going to do? Just sit there?" Well, yeah. Because there's nothing out there. It's stupidity. Stupid people mingling with stupid people. Let them stupidity themselves. I've never been bothered with the need to rush out into the night. I hid in bars because I didn't want to hide in factories. That's all. Sorry for all the millions, but I've never been lonely. I like myself. I'm the best form of entertainment I have. Let's drink more wine!”
― Charles Bukowski

“We're all going to die, all of us, what a circus! That alone should make us love each other but it doesn't. We are terrorized and flattened by trivialities, we are eaten up by nothing.”
― Charles Bukowski

“there is a loneliness in this world so great
that you can see it in the slow movement of
the hands of a clock.

people so tired
mutilated
either by love or no love.

people just are not good to each other
one on one.

our educational system tells us
that we can all be
big-ass winners.

it hasn't told us
about the gutters
or the suicides.

or the terror of one person
aching in one place
alone

watering a plant.”
― Charles Bukowski, Love Is a Dog from Hell

“An intellectual says a simple thing in a hard way. An artist says a hard thing in a simple way.”
― Charles Bukowski

“If you're losing your soul and you know it, then you've still got a soul left to lose”
― charles bukowski

“Find what you love and let it kill you.”
― Charles Bukowski


“Real loneliness is not necessarily limited to when you are alone.”
― Charles Bukowski

“I will remember the kisses
our lips raw with love
and how you gave me
everything you had
and how I
offered you what was left of
me,
and I will remember your small room
the feel of you
the light in the window
your records
your books
our morning coffee
our noons our nights
our bodies spilled together
sleeping
the tiny flowing currents
immediate and forever
your leg my leg
your arm my arm
your smile and the warmth
of you
who made me laugh
again.”
― Charles Bukowski