Some of The Best Quotes 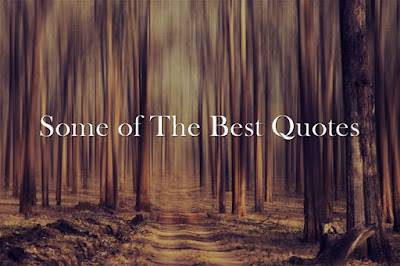 A trip of a thousand miles
must begin with a single step.


One rule sums up all the others,
and that rule is to love...
first, love God, and then, love others.


If you would not be forgotten
as soon as you are dead and rotten,
either write something worth reading
or do things worth the writing.


Truth will not break like a bubble, at a touch;
no, you may kick it about all day like a football,
and it will be round and full at evening.


Whoever talks to you about others
will talk to others about you.

what you would want them to do to you.
Jesus, Matthew 7:12

You have to kiss a lot of frogs
to find your prince.


Anyone who does anything important
is surely going to be hated, and misunderstood.

Every great man understands it;
and understands, too,
that being hated is no proof of being great.

The last proof of being great lies in being able to take the hate without becoming bitter.
Elbert Hubbard (1856 - 1915), American writer, artist, phlosopher


If your enemy is hungry feed him;
if he thirst, give him drink: for in so doing
you shall pile coals of fire on his head.


Think how hard it is to change yourself
and you’ll understand what little chance you
have of changing others.

Are you bored with life? Then throw yourself into
some work you believe in with all your heart.

Live for it, die for it, and you will find happiness
that you had thought could never be yours.


How to Win Friends and Influence People


The time will never be ‘just right’.

Start where you stand,
and work with whatever tools you have.
Better tools will be found as you go along.

If you can’t change it, change your attitude.


A bank manager is a person
who lends you his umbrella
when the weather is clear,
but wants it back the minute it begins to rain.


A great weight was lifted from my shoulders
the day I learned that no one owes me anything.

Don’t cripple your children
by making their lives easy.


I’ve had a lot of worries in my life,
most of which never happened.


The way to have friends is to be one.

I pray that I would have the strength
to turn against my country.


When I work fourteen hours a day,
seven days a week, I get lucky.


Nothing is especially hard
if you break it down into small jobs.


Only one life. It will soon be past.

Only what’s done for love will last.

until he says someone pushed him.

Don’t spend your time asking
‘Why isn’t the world a better place?’

It will be time wasted.

The question to ask is
‘How can I make it better?’

To that there is an answer.


There is so much good in the worst of us,

And so much bad in the best of us,

That it does not become any of us
To talk about the rest of us.


You can no more win a war
than you can win an earthquake.


They laugh at you, then they fight you,
and then you win.

Let someone else blow your horn,
and the sound will travel twice as far.


A lie gets halfway around the world before the
truth has a chance to get its pants on.


I never did a day’s work in my life.

It was all fun.


My country is the earth,
and my religion is to do good.


We were made to help each other.

If you have something to teach us, do it.

If not, listen to what we are teaching.


Success seems to be mostly a matter of
hanging on after others have let go.


Words once spoken
can never be brought back.

Talk between two people becomes an argument
when one or the other stops listening.


Better a fence at the top of the cliff
than a hospital at the bottom.


He who asks a question is a fool for five minutes;
he who does not ask stays a fool forever.


People should read what they want to read.
What they are forced to read
will do them little good.


Being an adult means being able to say
‘I’m sorry you feel like that,’
and then walk away. That’s hard.


When good people do nothing,
it is all that evil people need to win.

When planning for a year,
plant corn.

When planning for life,
teach children.


What kind of place would this world be,
If everybody in it was just like me?


Not many sounds in life
are more interesting than a knock at the door.

The more arguments you win,
the less friends you have.

“My thoughts are not your thoughts, and your
ways are not my ways,” says God.

We are guilty of all the good that we did not do.
Voltaire (1694-1778), French writer, historian, philosopher

Dying does not take a smart person by surprise.

Change yourself and you change the world.
Anonymous

Why do you call me Lord,
if you will not do what I say?


It is not that Christianity
has been tried and did not work.

It is that people could see that it was difficult,
and because of this, they have never tried it.


The fear of God is the beginning of wisdom.


If you want to be rich,
you must learn to buy less.


John D. Rockefeller (1839-1937), oil magnate and philanthropist
when asked how much money a person needs to be happy


Think about the flowers in the field,
how they grow.

They do not work and they do not make cloth.
But I say that Solomon with all his wealth,
was not dressed as well as one of them.


We have nothing to fear but fear itself.

The pen is stronger than the sword.